Knowledge of U shackle 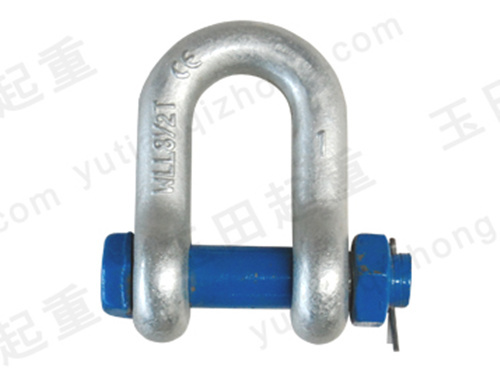 Shackles, rings, eye hooks, rope cards, clamps, etc., are the main end fittings that make up the slings and spreaders. Correct use or not directly relates to the carrying safety of spreaders and rigging.

● Technical parameters should have a rated load

Shackles are divided into two types: D-type and bow-type. They can be used as end fittings to directly lift items, and can also form flexible rigging connectors. More product specifications, generally based on the actual use of the situation, according to the shackle's rated load selection. WII indicates the rated load.

The national standard model is directly marked with the rated load.

American standard models directly mark the inch and rated load. For example, the model number is 1 1/2 and the rated load is 17 tons.

1. There is obvious permanent deformation or the shaft pin can not rotate freely.

2. The wear of the cross-section of the buckle body and the shaft pin is more than 10% of the original size.

3. Any cracks appear on the shackle.

4. The shackle cannot be locked.

6. If the shackle body and the shaft pin have a large area of corrosion or rust, they should be scrapped immediately.